Osaka in Japan is a candidate city to host World Expo 2025. Its theme is "Designing Future Society for Our Lives" and health is one of the important keywords in this theme: Theme | OSAKA,KANSAI EXPO 2025 | 2025 Japan World Expo Committee Secretariat. Spontaneously, tobacco control is one of duties because smoking hams health and shortens lives. Prefectural Assembly and Government have plans to strengthen tobacco control by local legislation. However, I doubt if this issue is seriously tackled in Osaka because Prefectural Government does not understand the significance of tobacco control and actually allows tobacco promotion in Expo'70 Commemorative Park, a Prefectural park build on the site of the past Expo 1970 held in Osaka. In my opinion, tobacco promotion should be banned to create a future without tobacco.

Tobacco Control is weak in Japan

Tobacco control is not strictly enforced in Japan although Japan is a party of FCTC (WHO Framework Convention on Tobacco Control). The law of protection from exposure to tobacco smoke will cover only 45% of restaurants, for example, even though it has made an amendment in this summer. Advertising, promotion and sponsorship are still allowed in public spaces. Pictorial warnings are not yet introduced to the packages. Tax is not very high although it has just raised in this October .

Strengthening tobacco control is one of the tasks for Osaka to make the 'healthy' theme convincing so as to be selected as the venue of Expo 2025. Osaka Prefectural Government plans to make a local law to protect more people from exposure to second-hand smoke. The bill will be submitted to Prefectural Assembly on February 2019. Additionally, the majority of Assembly agreed that another bill to protect, especially, children from exposure to second-hand smoke will be approved by the end of this October i.e., before the final vote at BIE's General Assembly in Paris on 23rd November.

Osaka hosted Expo in 1970: (https://www.bie-paris.org/site/en/1970-osaka). The site became Expo'70 Commemorative Park, a very big park where a lot of people, including families with children, gathers on weekends to enjoy gardens, athletics, museums, flea markets, food events and so on: www.expo70-park.jp
Tower of the Sun (Tower of the sun | 万博記念公園) is the symbol of the park. Its face and back: 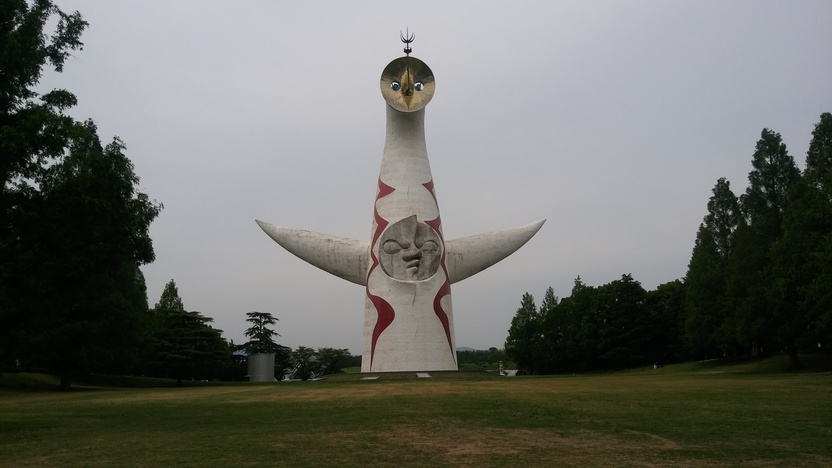 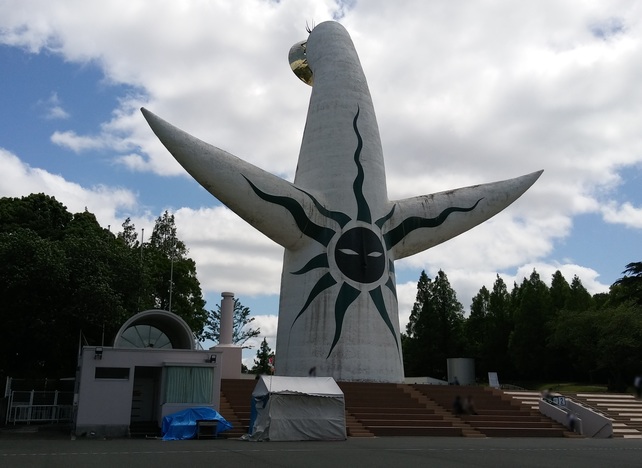 The park is maintained by Osaka Prefecture (in Japanese): 大阪府／日本万国博覧会記念公園事務所.

Promotion of heated tobacco products (HTPs), such as iQOS of Philip Morris International, glo of British American Tobacco and ploomTECH of JT(Japan Tobacco), is repeated in the park on weekends when events are organized. The tobacco industries collaborate with the event organizers and assemble tents for smoking areas in order to promote HTPs there. I asked the park office to prohibit tobacco promotion from the events, but the office said that the event organizers are responsible for choosing collaborators and the office cannot ban tobacco industries from the events. Check the photos of tobacco promotion at the end of this article.

WHO recommendation and agreement under FCTC

All forms of tobacco use are harmful, including HTPs. Tobacco is inherently toxic and contains carcinogens even in its natural form. Therefore, HTPs should be subject to policy and regulatory measures applied to all other tobacco products, in line with the WHO Framework Convention on Tobacco Control (WHO FCTC)

Recently, on 6 this October, 8th Conference of the Parties of FCTC in Geneva (WHO | Eighth session of the Conference of the Parties (COP8)) closed and the parties agreed that HTPs are regulated in the same way as the standard cigarettes are:
www.voanews.com
So, HTPs promotion should not be allowed according to FCTC article 13: WHO | Guidelines for implementation of Article 13.

Can Expo 2025 leave a lecacy helpful for heath to Osaka?

I am afraid that Expo 2025 site, if Osaka is selected as the venue, will be again used for tobacco promotion after the period. If Osaka thinks people's health seriously, it is important to prevent next generations from starting any form of tobacco products. One way, as FCTC suggests, is to ban tobacco promotion from public spaces, in particular where lots of children come like Expo'70 Commemorative Park in order not to touch their eyes.

Garage Sale at Festival Plaza (Omatsuri-hiroba) on 20th May 2018

You can find Philip Morris's promotion very near Tower of the Sun. The tower shows its back. 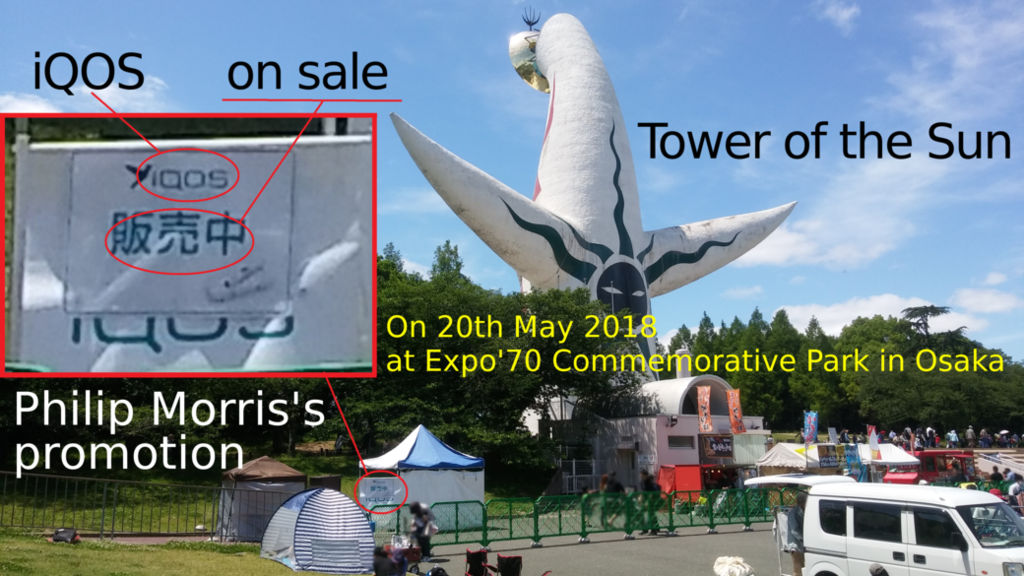 You can find Philip Moriis's promotion and Tower of the Sun. 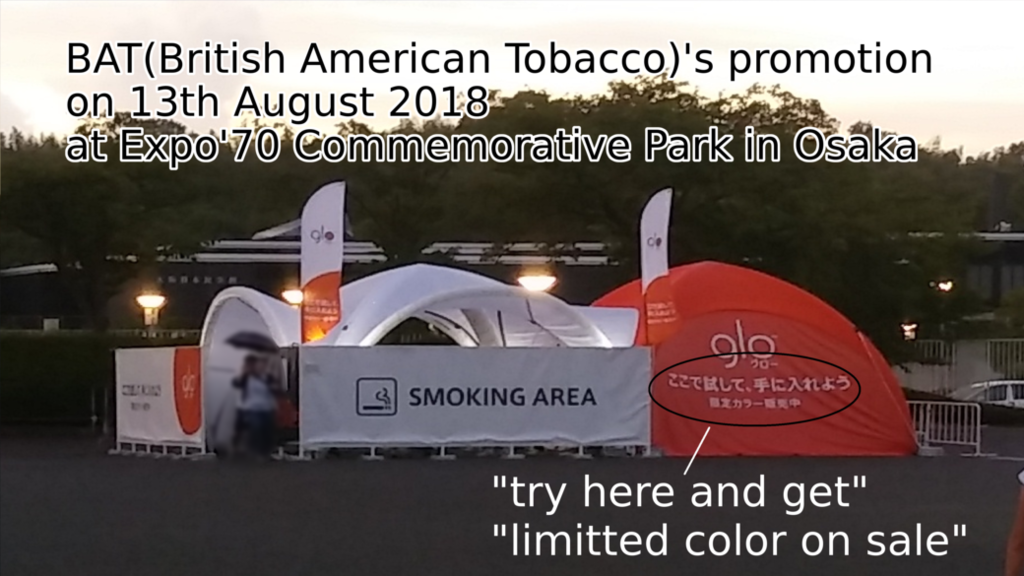 British American Tobacco participates in Manpaku, a big food event. The website (in Japanese) is: 巨大フードイベント「まんパク」大阪府吹田市 万博記念公園で2018年10月開催！.
You can find the logo of glo in the screenshot: 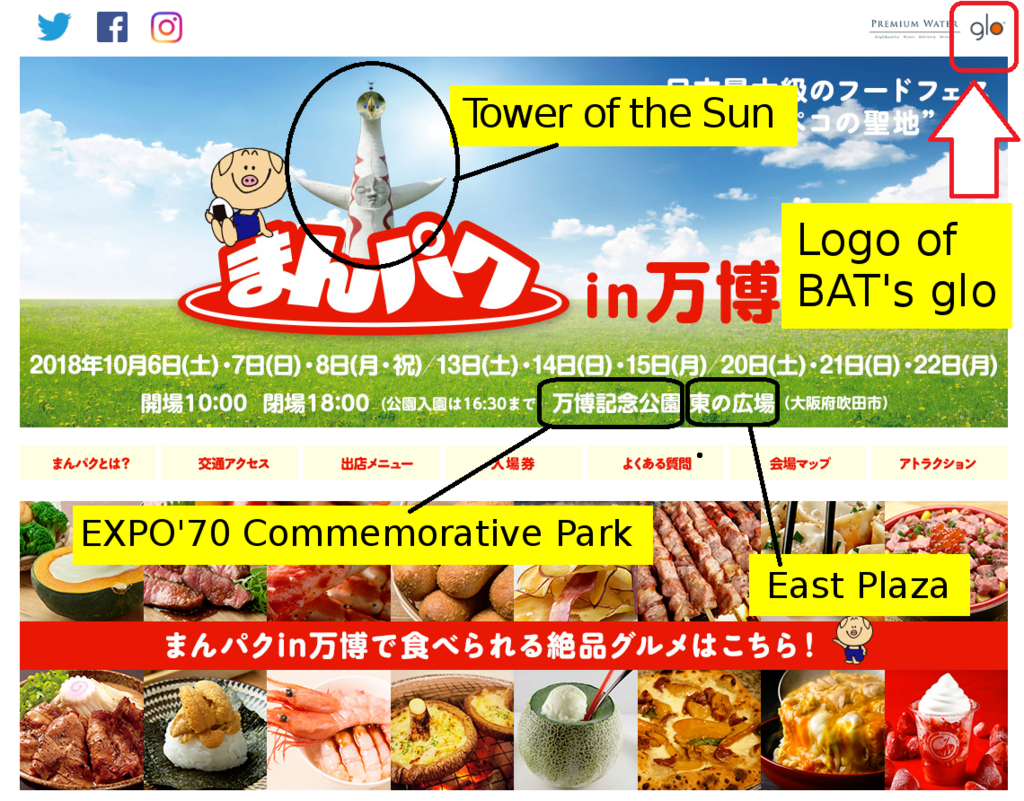 You can find the name of BAT in another screenshot: 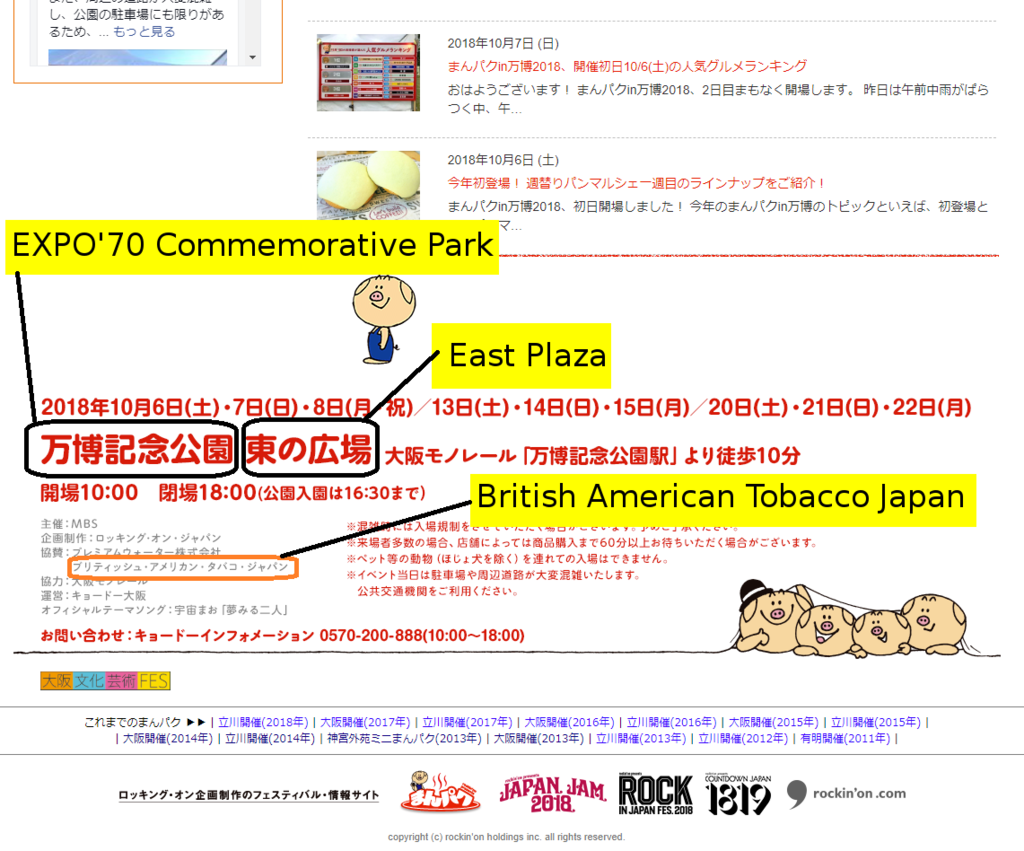 You can find BAT's promotion next to the smoking area: 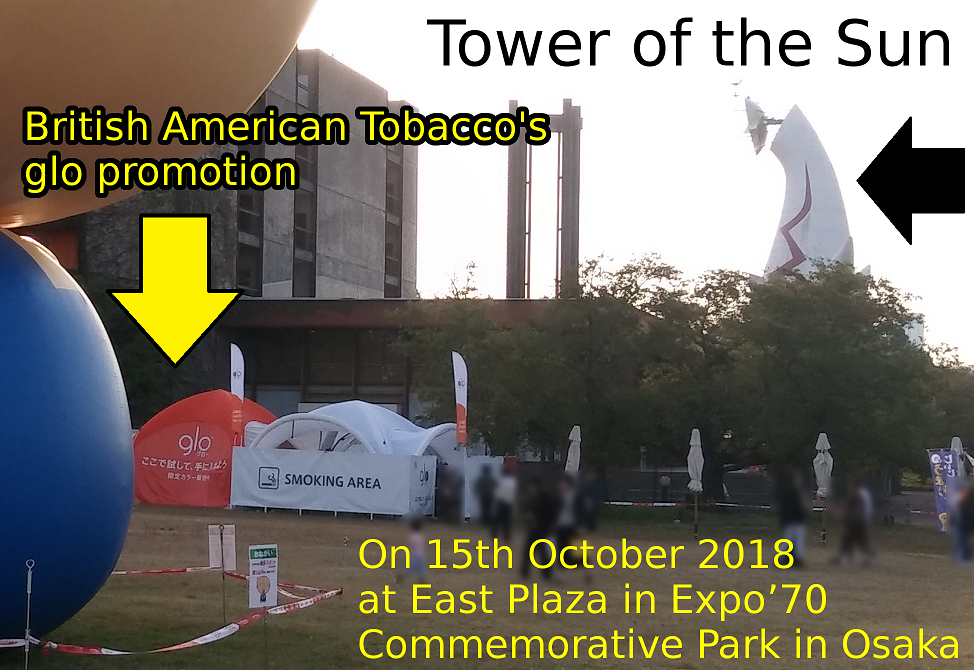 The event is a part of Osaka Cultural and Art Festival, organized by Osaka prefecture.
The website is: The Osaka Culture and Arts Festival 2018 | Culture & Art Mix EXPO.
You can find JT(Japan Tobacco)'s ploomTECH promotion: 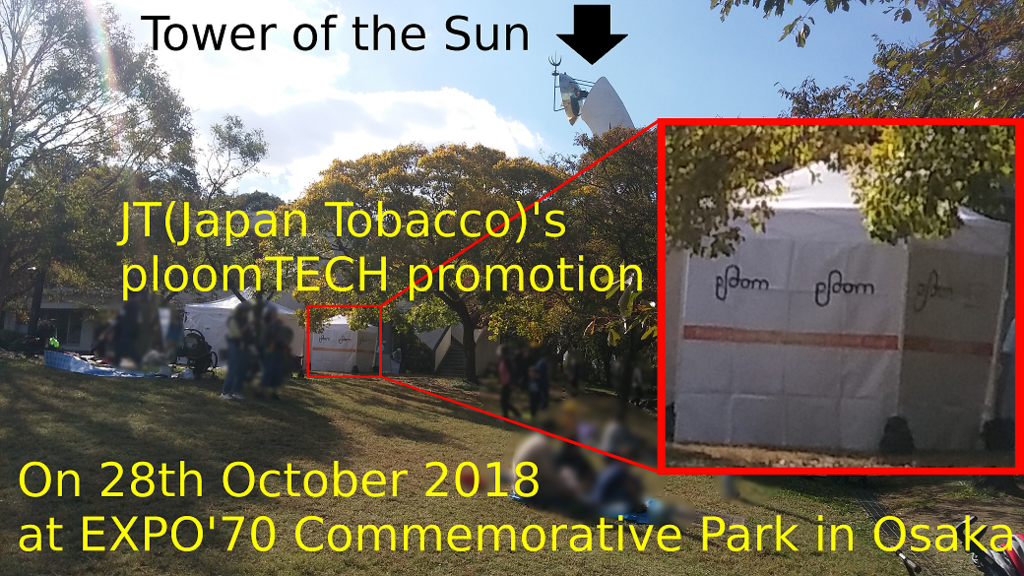 JT(Japan Tobacco) joins to this event as "Official Supporter".
The website is (in Japanese): 万博会場TOPページ | ロハスフェスタ（LohasFesta）.
You can find the JT's logo in the screenshot: 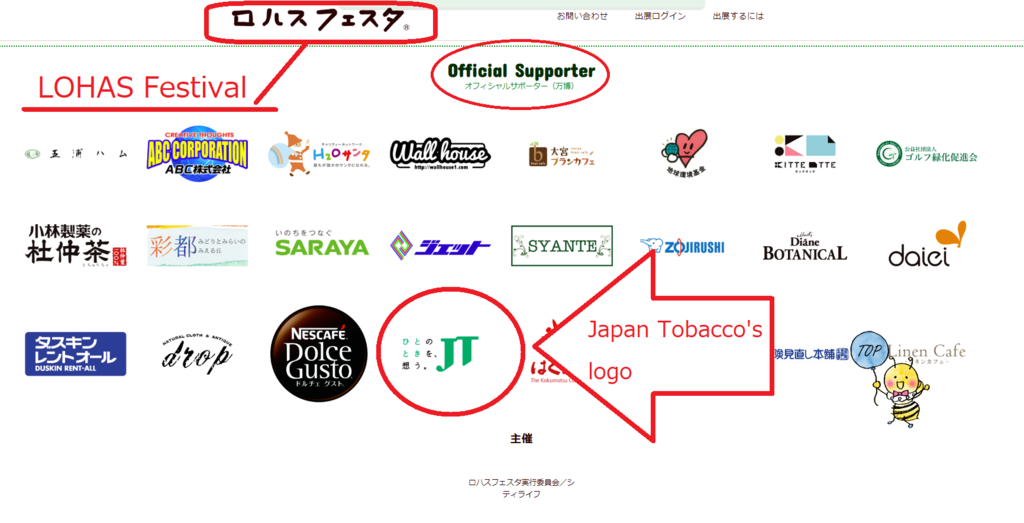 .
LOHAS is for "Lifestyles of Health and Sustainability". Tobacco is opposite to LOHAS because tobacco kills.